Mestia, the main regional center of Zemo (upper) Svaneti, is situated 456 km from Georgia’s capital city, Tbilisi, and is 1,500 meters above sea level.

It is the starting point for most trips to Svaneti, with a range of hotels, guesthouses and local travel services, and makes a convenient base for exploring the area. From the center of Mestia it is possible to hike up to the glaciers at the foot of mount Ushba, or take horses into the pristine alpine meadows. A new ski resort makes it possible to ski or snowboard even in the height of summer.

Tourists interested in religious history will find plenty of examples of wall paintings, frescoes and icons from the Middle Ages in the churches around Mestia. Within Mestia, the Church of Saint George contains well-preserved crosses and icons from the XII century. Additionally, Pusdi Church still contains fragments of XIII century wall paintings. 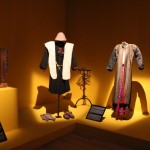 The museum was founded in 1936 and houses historic artifacts from the Svaneti region, including unique icons and engravings, a rich collection of manuscripts, medieval weaponry, iron, silver and copper ornaments, jewelry, pottery, and a collection of textile items, ethnographic artifacts depicting ancient life in Svaneti, and more. 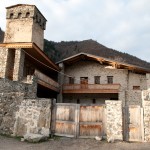 The ground floor of the museum houses personal items of the famous alpinist – Merited Master of Sport Michael Khergiani (1932-1969). Among the collection you will find climbing equipment, clothing, photos, awards, and gifts – including several musical records by Vladimir Vysotsky and a song which he dedicated to Khergiani.

The church is located in Laghami – the oldest part of the town of Mestia. The first floor of the two-story basilica is named after the Great Martyr Barbara (Barblash) and dates back to the IX century. The second floor was constructed in XIII-XIV centuries and decorated with beautiful frescoes. The outer wall of the Cathedral is also covered with paintings. The northern facade depicts the “Banishment of Adam and Eve from the Garden of Eden,” while the eastern wall features “Hunting of St. Eustaphios.” The cathedral also houses a XIII century gold and silver engraved icon of Christ (pantokratori).

4. Ski lift and the view from Zuruldi

About 8 km from Mestia, you will arrive in Hatsvali, where a 1.5 kilometer long ropeway will take you to mount Zuruldi. This mountain is well known for its unique views of the white slopes of Tetnuldi and the Caucasus mountain range. During the winter months, this area features a 2,400 meter long ski slope. 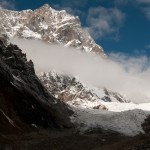 The glacier is located on the southern slopes of the Caucasus Mountains, at the source of the river Mestia- Chala. The height of the glacier is 1850 meters. Chalaadi is the only glacier that extends into the forest zone. The glacier is fed by the mountain streams Bzhedukhi, Chatini and Dalaqori. 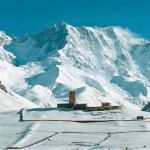 Ushguli is located in the municipality of Mestia, at the bottom of mountain Shkhara, near the confluence of rivers Inguri and Shavtsqala-Kvishara. The community is comprised of 4 villages (Zhibiani, Chvibiani, Murqmeli and Chazhashi) and their height ranges from 2060 meters to 2200 meters above sea level. This makes Ushguli the highest settlement in Europe. The center of the community, Chazhashi, has been declared a museum and is a UNESCO World Heritage Site. 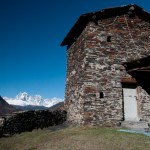 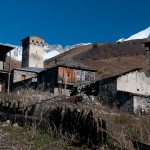 Within the vicinity of the village Adishi, you can find numerous monuments of medieval Georgian art: four churches featuring beautiful frescoes, traditional houses, unique towers, and samples of engraved artwork.

The eastern facade of the chapel features depictions of animals. The interior of the church was painted in 1130 by a man named Theodore, who was an artist for the King. An engraved icon of St. George, crafted by an XI century goldsmith is preserved in the church as well.

Located in the village of Latali, the local people refer to it as “matskhvarishi.” Constructed in the X century, the quality of artistry in the church is mesmerizing. It also houses a XII century Byzantine cross decorated with cloisonné enamel.