Kazbegi National Park is located on the northern slopes of the mighty Caucasus range, and its protected area covers a total of over 8,700 hectares. At 5,047 metres above sea level, Kazbegi Mountain (or Mkinvartsveri) is the third highest mountain in Georgia, and is surrounded by myths and religious tradition.

According to Greek mythology, as punishment for teaching mankind how to make fire, the Titan Prometheus was chained to a mountainside in the Caucasus for all eternity. According to Georgian stories, it was the icy slopes of Kazbegi to which he was chained. Prometheus (known as Amirani in Georgia) was supposedly imprisoned in a cave 4,000 meters high. The cave, now called Betlemi (Bethlehem), later served as a dwelling for orthodox monks, and is said to have contained many sacred relics, including Abraham’s tent and Christ’s manger.

Hot springs and acidic and carbonated lakes surround the mountain, and earth tremors are fairly frequent. Covered with 135 square kilometres of glacier, Kazbegi is a great place for ice climbing and mountaineering.

The Dariali Gorge is an impossibly steep cleft in the mountains connecting Russia and Georgia, running for 18km from Stepantsminda to the Russian border at Zemo Larsi (Upper Lars). For millennia, this mountain passage has been strategically crucial, and has been fortified since at least 150 BC. In places, the cliff faces are more than 1,000m high, and medieval watchtowers, waterfalls and wildlife make this one of the most incredible roads in the world. The steep valleys either side of the gorge are great places for bird watching. Eagles, hawks and the massive griffon vultures all nest among the rocky outcrops.

The town of Stepantsminda (also called Kazbegi) itself is charming and a wonderful base camp for exploring the region further. There are many guesthouses where locals are happy to treat you like family, rustic and beautiful with views of the mountains, and often the picturesque Gergeti Trinity Church.

The Museum is located in the memorial house of the Georgian writer Alexander Kazbegi (1848-1890). Together with the library and personal belongings of the writer, the museum houses ethnographic artifacts typical of the Khevi region; archaeological exhibits; religious relics; books, and various works from local artists. 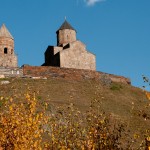 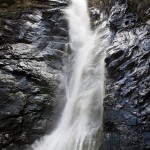 The waterfall is located in the village of Gveleti, 7 km from the town of Stepantsminda. You must first drive through the stunning Dariali Gorge, from which a short, leisurely hike up a narrow footpath leads the way to the Gveleti waterfall. Gveleti means “place of snakes” in Georgian, so keep an eye out for local wildlife! 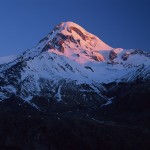 A hiking trail leading to the glacier starts in Stepantsminda and follows the Dariali Gorge. Along the way you will pass the Gveleti waterfall, as well as a birch forest, and a wide variety of plants typical for the Alpine climate. 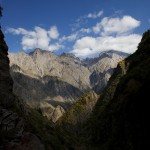 The gorge begins at the confluence of the river Chkheri (close to Stepantsminda) and ends near Upper Lars. The Gorge itself is 11 km long. The confluence of the Kabakhi and Khda rivers is the most narrow and rocky part of the gorge. You will also have an opportunity to see a Georgian Orthodox Church located within the gorge. 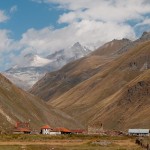 You will encounter plenty of historic and cultural sites here, including abandoned villages, colorful sediment deposits from mineral waters, and glacial and river deposits. Truso Gorge is rich in carbonated mineral waters. You will also find birch forests throughout. 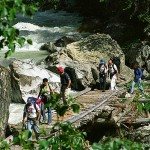 The Gorge is located near the Russian border at Upper Lars. This area is mostly visited by mountain climbers. To get here you will pass through the Dariali Gorge, where a hiking trail passes a newly built monastery complex and leads through the riverbed of Brolistskali. The distance from Stepantsminda to the monastery is about 11 km and the length of the footpath is approximately 17 km. 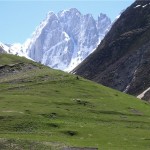 The gorge begins at the village of Akhaltsikhe (the Sno Gorge) and stretches along a riverbed of Artkhmostsqali.

Here you can visit the ancient abandoned villages Miguda and Artkhmo, and see beautiful waterfalls along the way.

Akhaltsikhe is a small town located 10 km away from Stepantsminda. 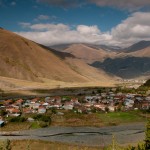 If you blink, you’ll miss this tiny settlement, located about 5 km from Stepantsminda. The home of the Patriarch of the Georgian Orthodox Church is here, and there is a small church in the courtyard of the residence. Sno also has a large statue of Vakhtang Gorgasali, and a tower fortification from the XVI century. 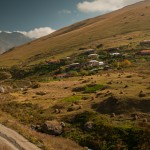 The village of Juta is one of the highest settlements (2200 m) in the municipality of Kazbegi, and is located 24 km from Stepantsminda (8 km of paved road, and the remainder is a dirt road). The Chaukhi mountain range, located near the village, is situated on the main ridge of the Caucasus mountain range, at the source of the river Bakurkhevi.