Borjomi is famous for its mineral water industry (which is the number one export of Georgia). Archaeological excavations have revealed the existence of stone baths in the area, proving that these mineral waters have been utilized by people for thousands of years. Because of the supposed restorative and healing powers of the area’s mineral springs, it is a frequent destination for people with health problems. Borjomi is also home to the most extensive ecologically-themed amusement park in the Caucasus. 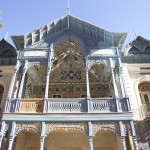 “Firuza” is one of the most important historical buildings in Borjomi. Situated at the entrance of the “Mineral Water Park,” it was built in 1892 by the consul of Iran and is considered a unique cultural monument. The building combines characteristics of Persian, Georgian and European styles. 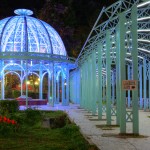 The most remarkable virtues of Borjomi are its striking nature and unique mineral waters. One of the best places to experience this is the “Mineral Water Park” of Borjomi. The park itself dates back to the 1850s and is an attractive destination all throughout the year. Here you can taste the natural Borjomi mineral water and relax in a beautiful environment. Try riding the cable car up to the Ferris wheel at the top of the park! 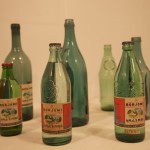 One of the oldest museums in Georgia; it first opened its doors in 1926. The building itself was constructed in 1890, and is unique both in its architecture and building materials used. Today it houses over 36,000 items, including four permanent exhibits. The Museum offers a full range of information about the town, from the flora and fauna to documents confirming Borjomi mineral water’s medicinal properties. It also contains many of the 18th–19th century glass, bronze, porcelain and wood artifacts which belonged to the Russian Royal family.

The castle is located to the north-west of Borjomi and was constructed around the 14th century. It belonged to the rulers of Borjomi, feudal lords- the Avalishvilis, and it still bears the name of Gogia Avalishvili. 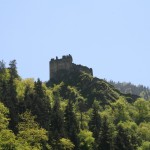 The medieval castle is located on a high rocky mountain, a few kilometers from Borjomi. In the XVI century, after the Ottoman conquest of Tori (a historic region of Georgia), Peter’s Castle was the administrative center of the Ottomans. Currently, the preserved remains of various buildings lie within the fortress walls, including ruins of a residence hall and a wine cellar. 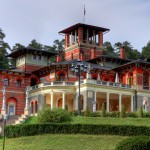 The Romanovs’ Palace dates back to the nineteenth century. In 1892-1895, the palace was built by the architect Leontin Benua, under the order of Russian Tsar Nikolas II. The palace houses unique exhibits, including a table given to the Romanovs by Napoleon, armchairs given by the Shah of Iran, and a historical hand-made table carved by the Russian Emperor Peter I. You will also find a Romanov era billiard table in the billiards room.

Borjomi-Kharagauli protected area is one of the largest national parks in Europe. Its total territory amounts to 85,083 ha, more than 1% of the territory of Georgia. The national park offers hiking, horseback riding, biking, cultural and educational tours – the routes function throughout the year. Picnic spots and camping sites are also situated along the routes. The National Park visitors’ center will be more than happy to help you with any organizational issues. 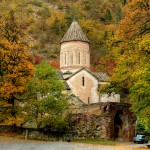 Located 17 kilometers from Borjomi, the church was constructed between the 12th – 13th centuries. The interior is decorated with some of the best examples of Georgian mural painting of the 13th century. 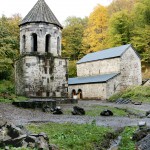 Built between the 9th-10th centuries, the Chitakhevi Monastery of St. George (the Green Monastery) is nestled in the beautiful Borjomi valley, 13 kilometers from the town of Borjomi. The church is constructed from special stones which have a green coloring to them, with some being darker and some lighter. 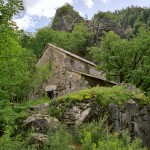 10. Kvabiskhevi Church of the Assumption

The three-aisled basilica, constructed in the 8th–9th centuries, is one of the most historic buildings in Borjomi valley, located just 21 kilometers from the town of Borjomi. The frescos within the church date back to the 12th and 13th centuries. Location: village of Kvabiskhevi.