Batumi—the “Pearl of the Black Sea,” as it is often called—is located in the autonomous republic of Adjara. European architects undertook numerous projects in Batumi at the beginning of the 20th century, and today it remains a hub of architectural innovation.

One of the most beautiful regions in Georgia, Adjara is situated in southwest Georgia on the Black Sea coastline. Turkey borders Adjara to the south.

Adjara’s visitors especially admire the region’s pristine and unaltered nature, and it is particularly intriguing for eco tourists. 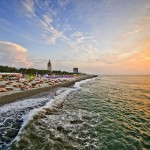 Adjara is home to the picturesque beaches of Batumi, Kvariati, Sarpi, Gonio, Tsikhisdziri, Mtsvane Kontskhi (the Green Cape) and Kobuleti. In the summertime, the beaches are filled with tourists enjoying their holidays. Adjara’s beach towns offer well developed infrastructure and fresh, healthy air. 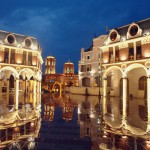 One of the oldest cities in Georgia, Batumi was founded in the 8th century, but the initial settlement, Batus, is mentioned in texts that date back to the 4th century BC. Batumi’s interesting historical past has considerably influenced the architectural diversity of city (a number of projects were completed by European architects during the Porto Franco period). Old Batumi’s most historical part is stretched between the seaport and the Boulevard, and features distinctive building facades and balconies. 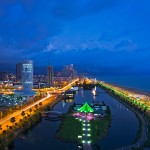 Construction of the 7 km seaside boardwalk begun in 1881 by the famous Prussian gardener and landscape architect Ressler. Two years after the project began, Ressler passed away and Michael D’alfons, a French architect, completed the boulevard. Recently, a Spanish architect designed and constructed a new, modern addition for the boulevard. The coastal line of the boulevard has been beautified with bungalows, café-lounges, restaurants, children’s attractions, benches, sculptures and dancing fountains—making it one of the city’s most attractive tourist destinations. 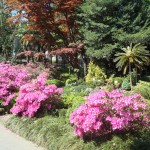 Boasting one of the widest varieties of flora in the world, the Batumi Botanical Garden was established in 1912 by the prominent botanist and geographer Andrey Krasnov. The garden is 111 hectares and contains flora from nine phyto-geographic areas: East Asia, North America, New Zealand, South America, the Himalayas, Mexico, Australia, the Mediterranean, and the Caucasian humid subtropics. Visitors can wander the botanical garden by foot or in carts, which can be rented from the garden’s administration. 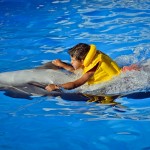 Located within the 6th of May Park, the Batumi Dolphinarium is one of the most-visited tourist attractions in Batumi. The affordably priced and wildly entertaining dolphin show is done in Georgian, Russian, and English. With its construction beginning in 1881, the 6th of May Park is one of Georgia’s oldest public parks. In addition to the Dolphinarium, the 6th of May Park has an aquarium, zoo and amusement rides for children. The park also sells tickets for a relaxing boat tour on Nurigeli Lake. 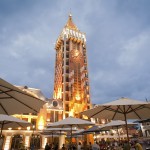 Piazza Batumi is one of the most beautiful squares in Georgia. There are several hotels, cafés, and restaurants located on Piazza Batumi. In just a few short years, the square has become a popular international entertainment venue. It has recently hosted concerts by famous Georgian and foreign performers, including Placido Domingo, Chris Botti, Sting, Macy Grey, Michel Legrand and Tamar Gverdtsiteli. 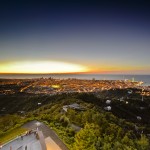 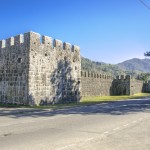 Gonio-Apsaros Fortress is located 12 km south of Batumi, on the left bank of the River Chorokhi. One of the Georgia’s most ancient settlements was located around this fortress. Due to its strategic location, Gonio-Apsaros became a supporting citadel first for the Romans and later to the Byzantines and Ottomans along the eastern Black Sea coastline. Respectively, the fortress has several layers: the Roman layer (3rd-4th cc BC), the Byzantine layer (6th-7th cc AD) and the Ottoman layer (16th c AD). The history of Gonio-Apsaros fortress references the myth of Jason and the Argonauts. According to the legend, King Aeetes buried his son Apsaros, who was killed by Jason as he fled, in the territory of Gonio. According to some sources, Mathias, one of the 12 disciples of Jesus Christ, is believed to be buried here. There is a museum inside the fortress. 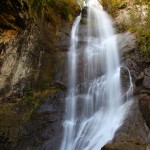 Makhuntseti waterfall is located near the town of Keda, at 335 meters above sea level. Near the waterfall several picnic sites are available for visitors. While visiting the waterfall it is also possible to visit nearby tourist attractions, including the ancient arched stoneMakhuntseti Bridge, Adjarian wine houses, and private wine cellars scattered throughout Keda Municipality. 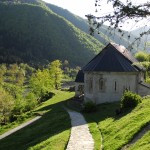 Skhalta Monastery is located in Khulo Municipality, the highest, most mountainous part of Adjara. The main building of the complex is Skhalta Church of the Virgin. It is a single-nave, hall-like church. Judging from its artistic and stylistic peculiarities, it is speculated that Skhalta Monastery was built during the mid-13th cent. The churches notable frescoes were painted in the 14th and 15th centuries.

Adjara operates as an autonomous republic in Georgia, and has its own flag and coat of arms.